For the last couple of months I’ve been working on and off on my C++/OpenGL “game engine”, mostly for the purpose of learning OpenGL. The feature I was the most excited about trying to implement in this engine was portal rendering. Actually understanding and implementing that correctly has taken me a little while but I feel like I know enough now to explain some of the concepts here. 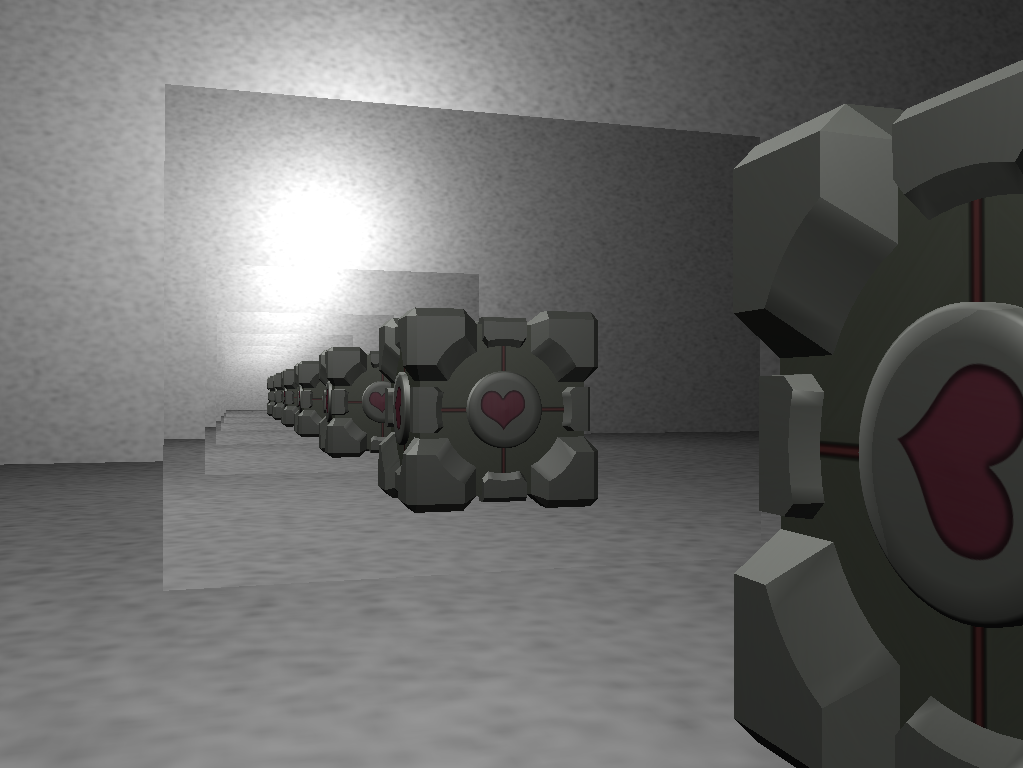 At this point I’m going to assume that you know the concept of portals as made famous by the game Portal, notably the idea of pairs of portals where looking at one will show you the scene from the viewpoint of the other and vice versa. Henceforth I will be calling the portal that’s currently being rendered the source portal, while calling the portal to which the source portal links the destination portal. 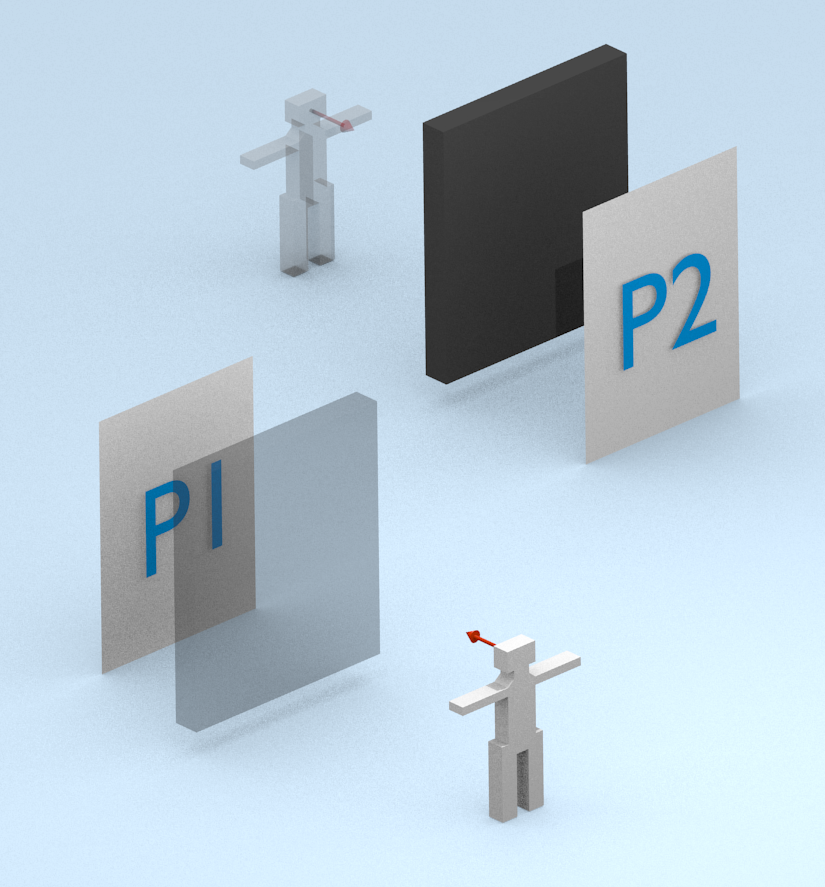 A solution for this problem is to change the virtual camera’s view matrix in such a way that its near plane starts at the plane of the destination portal. This is easily doable in the situation pictured above where the portal’s plane is perpendicular to the view vector, we would only have to change the near value to the distance from the virtual camera to the portal. However in other situations this isn’t as easy, and the resulting view matrix would not have the shape of a frustum. Luckily those shapes can still be represented by a matrix, and there’s a trick to modifying an existing view matrix so that the near cut off plane is an arbitrary plane. This technique is called oblique view frustum near-plane clipping. You can see my implementation of it here.

Now that we have a correct virtual view matrix, we can go on to actually rendering the portal. There are two popular techniques to do this with:

Rendering to a texture

This technique is generally accomplished in OpenGL using Frame Buffer Objects (FBOs). The process is basically as follows:

This seems pretty straightforward and although the last step takes some extra math to generate correct texture coordinates, it’s pretty doable. There is one big disadvantage though: texture resolution. From a distance this technique will look just fine, but as soon as you get really close to the portal – which is a thing that happens a lot, since in most situations they’re meant to be walked through – the individual pixels of the portal’s texture will really start to show. A potential fix could be to increase the texture’s size, but this brings up other issues such as GPU memory usage, especially when we’re going to be doing this recursively later on. Because of these reasons I’ve decided to go for the stencil buffer method as explained below.

The other popular way to render portals is to use the magical stencil buffer. This is a special buffer in graphics cards (in addition to the color buffer and the depth buffer) that can be used to mask out certain areas of the screen to prevent or allow drawing on the pixel level. This really just means that for every pixel on the screen there’s a small number (usually 8 bits) in the stencil buffer that you can write to and that the GPU can look at to determine whether or not to draw a pixel. This is very convenient because we can then just use multiple render passes with different stencil buffer contents, and use that to draw both the inside and the outside of the portal frame without using a separate render target.

When using the stencil buffer there’s basically two things you have to think about:

The second situation can be controlled by the stencil operation. This is set by the function glStencilOp which requires three arguments:

All three arguments accept operations like (but not only):

Now it should become quite clear how to render a single portal with the help of the stencil buffer:

It might not be clear at first why the portal is drawn twice: once in the stencil buffer, and once in the depth buffer. This is because in some cases we want the portal (by which I mean every virtual object that was rendered inside it) to be obscured by real objects in the scene. This is what the depth buffer is good at so that’s why it comes into play at the end.

For simplicity’s sake I explained how to render a single portal. Rendering multiple portals – with which I mean portals from the same level, as in portals from different pairs, not recursive portals – is very easy as well, it’s basically step 1 through 8 repeated in a loop. If you think about how this affects the stencil buffer you might see why I chose GL_LEQUAL instead of GL_EQUAL in step 7.

Now that we can render a single portal it shouldn’t be too hard to render portals recursively right? Well, even though the same techniques are used, it’s quite a lot more complicated and requires really bending your mind on what is in every buffer after every operation. I won’t present every step like I did in the previous section but I’ll explain some of the difficulties I came across and give you my final code.

The general trick to doing the stencil buffer method recursively is to increase the stencil value for every depth level. We should then be able to draw the n-th virtual scene in the area that has a stencil value of n. See the image below. 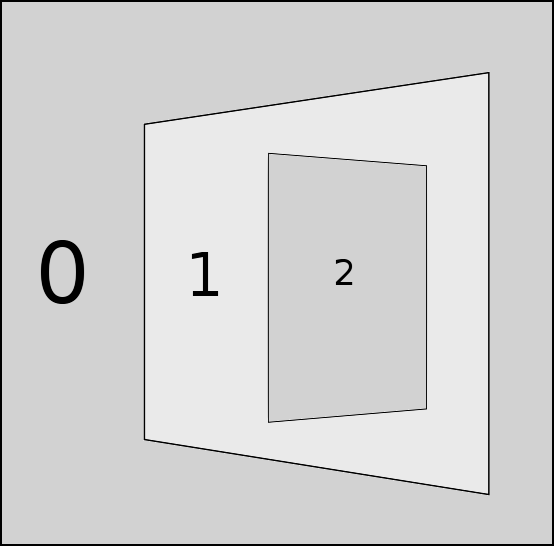 This can be done by recursively filling the stencil buffer with any portal frames at the current level, then increasing the stencil value by rendering the virtual portal(s) of the next level with the GL_INCR operation. When we’ve then reached our maximum recursion level, we start to draw the virtual scenes from the bottom up, starting at the highest stencil value, until we’re back at zero.

There is still one catch though, imagine the following scenario: 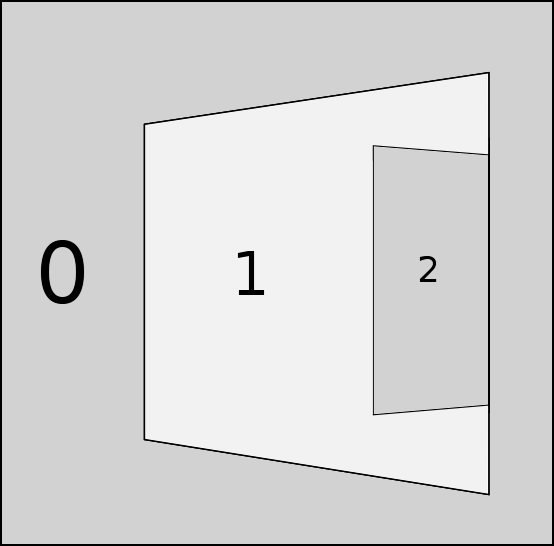 Here the virtual portal of level two overlaps the border of the portal on level one. What the image shows is how it is supposed to be rendered, but our naive method doesn’t quite render it like this yet. To obscure the part of the portal on level two, we have to enable the stencil test for the part where we render our portal to the stencil test. This is rather confusing and it took me a while to get it working, but once implemented the technique seems very robust and I haven’t found any cases yet that aren’t rendered correctly.

Something to think about when doing recursive rendering is of course performance. The screenshot at the top of this post slowed my engine down to less than 60 FPS while it normally runs at a couple hundred FPS. A good idea would be to think about only rendering parts of your scene virtually, possible using a technique like binary space partitioning (BSP). What’s also interesting is that to my knowledge, Valve used a combination of the methods explained above to keep performance high in Portal. They would render the first couple of recursions using the stencil buffer method while using the render-to-texture method for deeper recursion levels since those only fill very small parts of the screen.

Here’s the resulting code on GitHub. There are still various edge-cases that cause weird behavior, so feel free to open a pull request if you manage to improve something :)